WRITE WHAT YOU KNOW

Following my retirement after 32 years in the police service, working mainly as a detective, I set about working on the novel I promised myself I would write. I had already made one attempt in the early 1990’s whilst working undercover in drugs squad, making notes when on surveillance and writing them up in an old police cell during breaks. That work finished as a novella, many elements of it based on my own and former colleagues’ experiences and for many years it sat on a shelf not seeing the light of day. Last year I rescued it and began re-working it, adding new elements and characters from my policing experience and it has been launched as Hunter, the prequel to my DS Hunter Kerr series.

It would be fair to state that none of my books make for cosy reading, they are based on hard-hitting experiences from my work as a detective and some of the villains are a combination of felons I have come across during cases. In my novel Cold Death that is brought to the fore. In the early 1990’s, while working as a Sergeant in Barnsley, we were dealing with two rival gangs who were engaged in a turf war over drugs. There had been a number of beatings, stabbings and a shooting carried out upon the differing gang members. This culminated one evening by one of the gangs breaking into the mortuary at the hospital, taking a dead body from the cold storage and placing it in the boot of their stolen car. From there they drove to a closed school, where they removed it from the boot and placed it on the ground, and then drove fiercely around the playground, running over it numerous times. It takes little imagination to realise the mess the body was in. They then put the body back in the car, drove to the home of the rival drug dealer and as a threat of what was to come launched it through the front window of the house. He wasn’t in but his mother and grandmother were, watching television. Can you just imagine the terror they must have faced that evening.

That defiling act of that dead man’s body has stayed with me and by way of showing how evil my character – Billy Wallace - was in Cold Death I put a twist into this scenario to protect the identification of the story.

The character Billy Wallace came about following my attendance at the scene of a brutal attack on a woman by a man she was in a relationship with. The scene I visited was one of the bloodiest I have ever been to. The woman had been hacked at with a boning knife and machete. She’d been stabbed 37 times, had her throat cut and several fingers severed. Whilst on remand for this attack, knowing he had severed three fingers from his victim’s hand, he sent a packet of fish fingers to her with a note ‘These are to replace the ones you’re missing.’

She survived thanks to the quick actions of a neighbour who was a nurse, and she was eventually able to give evidence against him in court and see him jailed for a minimum of 22 years.

Once again, I played around with some elements of this incident to protect identification.

As crime writers we all draw on our experiences, and my stories and plots are based broadly on what I have experienced during my career, bringing out my thoughts and feelings through my protagonist DS Hunter Kerr. 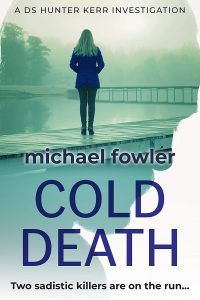