When did you first start writing? Did a specific event encourage you to start?

About the age of twelve, and it was a science fiction apocalyptic story, written in two exercise books from Woolworths.
I had an uncle, who was not only an avid reader but had a wonderful imagination, and as a teenager, I would spend many Autumn and Winter nights with him developing characters and drafting first chapters in front of a glowing coal fire with just a single table lamp burning. It made for a wonderful atmosphere. It was this uncle who introduced me to crime fiction.

How much research do you do?

Until recently I haven’t had to do much research. My Hunter Kerr novels crime novels are interwoven with my previous experiences as a detective, and I also have a number of colleagues I can contact, including a scenes of crime forensic investigator if I get stuck with my crime scenes.
However, I have just started a new series whose central character is a forensic psychologist and I have been so fortunate to spend time with a doctor who works in a medium secure unit with killers and rapists and got a fascinating insight into his working role. The first of the series is in the bag but the second is on the writing board and it has necessitated quite a bit of research.

Where do you write / your writing habits?

I have a study set out with everything I need. I start my day walking my dog on fields at the back of my home, and as I’m walking, I am working through what I will be writing when I return. I then hammer away at my keyboard for about five hours, doing some refining along the way, and then take my dog out for his second walk, reflect on the piece I have just written and do a mental edit. I’ll then return and make a few adjustments.

What part of the writing process do you find most difficult? Starting, knowing when you’ve done enough research, the ending?

I am a constructive plotter, and so work out a beginning and end, and build in significant events in the middle to drive the story forward. In my study I have a huge whiteboard, and I ‘run’ my stories as if they were a major incident (from my detective days), with photographs, timelines, and spider lines connecting characters to story, so I can keep track.

Storyboard for Shadow of the Beast.

How real do your characters become and do they ever seem to control their own storyline?

Many of my characters are based on people I know or have met, so it’s quite easy for them to own their story.

Do you ever feel guilty about killing off characters or do you relish it?

Not the villains. As I have mentioned above, my stories are based on my experiences as a detective, and so my villains are based on those I have come across during my career and so I find bumping them off quite cathartic. However, I have just killed off one of my leading detectives in my Hunter Kerr series and I had a great deal of angst about doing so.

What are you working on?

I am working on a new character who is a forensic psychologist’s in a psychological thriller, which is a huge shift for me as my previous novels are police procedurals.

Do you always know your ending?

As I have mentioned above, I am a plotter and planner and I generally have my ending worked out. However, in Secrets of the Dead, the ending changed dramatically when I bumped into a former colleague in the pub. The colleague in question was attached to Task Force and during our chat he revealed that he and his team were involved in a search in woodland for a man who had been missing for three weeks and they suspected he had been murdered and buried there. As he unveiled how his body had been discovered, it not only changed my ending of that book, but gave me a prologue as well. 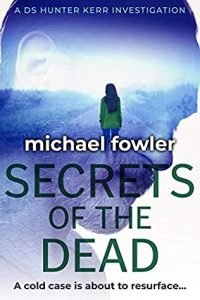