My journey into writing crime fiction began in my early teens, inspired and encouraged by an uncle, who was a lover of books, had a wonderful imagination and who taught me the basics of crafting a novel. In the Autumn and Winter months we would spend many an evening together in front of a roaring coal fire discussing crime fiction, and working on crime plots, developing characters and opening chapters.

Becoming a police officer in 1976 was the stepping-stone for crafting my crime stories. The on-the-job experiences provided me with the ideal material to weave into my writing and it was around this time that I discovered the work of Ed McBain. I devoured many of his 87th Precinct novels and knew that this was how I wanted to formulate my own novels.

I got that opportunity upon my retirement in 2006 after 32 years in the police. During that time, I had dipped in and out of writing groups - usually in between investigations - writing short stories and numerous first chapters based on my experiences, promising myself that one day I would complete a novel. Now there was no excuse, and I had so much rich material to draw upon – some humorous and some pretty gruesome – that I deemed worthy of progressing.

Added to that, I also had my many experiences as a detective. I began my plain clothes work in Vice Squad during the Ripper era. I progressed to CID and was involved in many notable murder investigations and then as a Detective Sergeant I entered Drugs Squad working undercover. My last job was as an Inspector, in charge of a busy CID, whose work was centred around sex offenders, child protection, domestic violence and racial incidents – a rich vein to draw upon.

My protagonist, Hunter Kerr, first appeared in 1995 as a rookie cop. It took me eighteen months to write, (initially in longhand) mostly tucked away in an old police cell during lunch breaks. The finished piece was titled ‘Loitering with Intent’ and though it finished short of being a novel, it had all the structure of a book led by a central character that was loosely autobiographical. For years it sat on a shelf until recently when I decided that this would form the basis of my prequel HUNTER. 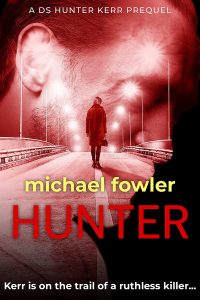 It would be fair to say that there is a fine membrane between myself and my character Detective Sergeant Hunter Kerr. The storylines are interwoven with my own experiences as a cop or linked to incidences involving former colleagues and I’ve taken liberties with them. Hunter’s thoughts, feelings and emotions are mine as is much of his background. Where we differ is, I didn’t lose my first love to a serial killer.